Cook the cauliflower rice in the convection oven for 8 mins.

Add green beans. Cook over low to medium heat no longer than 7 minutes. You want them still slightly crunchy, not soft.

Add all ingredients together.

Chop basil and mix in and garnish if desire

Place dates in a bowl of distilled water and soak for 1-4 hours.

Add Collagen/gelatin.  Add another tbsp if you feel it’s too wet.

You can store them in the fridge.  They will get soft in the heat due to the coconut oil content

Add all ingredients to a mason jar and gel in the fridge.

You can heat this up for a warm pudding or dip.

1-2 TBSP is a serving, depending on your spice level.

6 dried chiles de arbol or other peppers of your choice.

I used what was available to me:

If you’re using the dried peppers place them into a large bowl and pour boiling water over them. Let them steep for 20 minutes to soften. Cut tops off, de seed, and remove skins.

I used fresh peppers and roasted them. Let them cool and deseeded and peeled the skins off of them.

In a seasoned cast iron skillet, (spray with coconut oil) dry roast the coriander, cumin and garlic cloves for about 2-3 minutes until they are fragrant. Cool and then grind them up with a mortar and pestle.

Add the paste and the roasted seeds and blend.

Drizzle the olive oil in after it is blended.

Divide into half cup containers.

(Adapted from the Hatch Family Recipe)

I had a client tell me his mom makes the BEST Pumpkin pie EVER!  So naturally, I had to try it.  But of course…make it so I could eat it as well 🤣

So, I combined my crust with her filling and TaDa….it’s pretty Tasty!!!

Prepare your favorite pie crust.  She uses a store bough version, I wanted a dairy free, gluten free crust, so…

1 Cup Paleo Flour (Walnuts, Almonds, Coconut and Pecan) you can use 1 cup Almond meal if you want.

Soak the dates for 1-4 hours.  Remove the pits.

Mix in the food processor until blended well.

Scoop into a pie plate or bar pan.  Press the mixture together until it is uniform on the bottom of the pan.  No baking required!!!

2/3 Cup Macadamia Nut Milk or you could use Coconut milk (if you want it creamier, try coconut cream).

Pour into your prepared crust.  Chill for an hour at least. 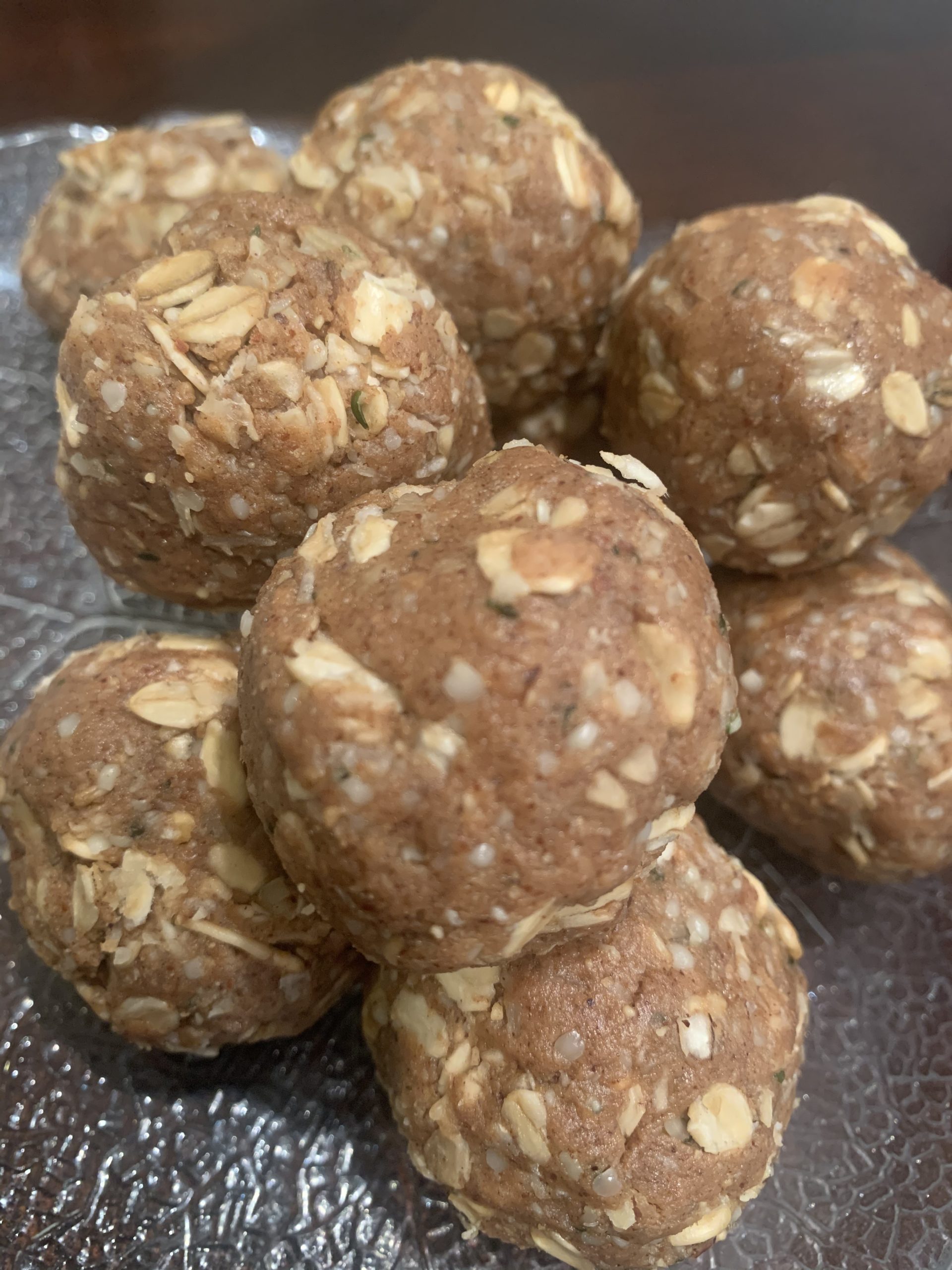 Mix Almond butter and honey together.  If your honey is not soft, heat on the stove top until blended. (Not the microwave please)

Add everything but Oats.  Mix well them stir in the oats or quinoa.

If it’s too dry, add a little water at a time.

You can store in the fridge or freezer.

If you want a higher Protein snack, use quinoa instead of oats. If you have thyroid problems or trouble with digestion, oats is a grain that the body has a hard time digesting and converting into energy.

Peel bananas and mash well with a fork.  No large chunks should remain.

Mix the flour, baking powder, baking soda, cocoa powder, and sea salt.
Fold until most the flour has been incorporated.
Fold in chocolate chips or save and top w/chocolate chips.

Bake for 45-55 minutes.  A toothpick should come out clean.

Remove and let cool for 15 minutes in pan.

Carefully remove and completely cool on a cooling rack.

What do you do for your Dear friend who loves sangria AND it’s her birthday? You create her a new recipe with a twist and add her favorite Liquor, Malibu. Normally in sangria you would you would typically use a brandy, but Jenny is anything but typical and deserves her own special version! Delicious!!!

Happily serves: Depends on which friends you invite over!

Soak the pecans in distilled water and 1 tbsp sea salt for 12 hours, put a lid on. Cover nuts with at least 2 inches of water.

Drain and rinse the nuts in a strainer.  Add to clean distilled water and repeat for 12 more hours.

Rinse and pat dry before placing on the dehydrator.

I sprinkled with fine sea salt and dehydrated them for 11 hours on 118 degrees.

Add pecans to the food processor and blend well.

Then add remaining ingredients and blend to desired consistency.

You can add whole pecans and pulse in if you want a crunchy consistency.

Rinse quinoa in a strainer.  Cook Quinoa according to desired texture. (I do a ratio of 1.5 cup water/broth to 1 cup quinoa, then cook at a slow simmer for about 15 mins)

Cook beans in a pressure cooker or Rinse beans well if you are using a can. Drain water

Combine all ingredients and stir well, chill and serve!