Do you struggle with Depression or know someone who does? Tired of being pushed the drug route? Want to heal your body naturally?  Try a few of these herbs.  You  can take them in combinations in tea form or supplement form.  If you need help deciphering what you think you need first, let me help you sort it out before you spend extra money trying to experiement on your own.

Herbs for depression
Rhodiola rosea
Rhodiola rosea (Crassulaceae) is a perennial plant that grows in cold, alpine regions of the Northern Hemisphere. Its roots contain a sap that has long been used to improve physical and mental endurance, relieve symptoms of anxiety and stress, and even lift mood and alleviate depression symptoms. This is why it is considered to be an adaptogen, a natural substance that helps normalize the body’s response to stress, and maintain optimal homeostasis by balancing the immune system and endocrine hormones (http://cms.herbalgram.org/herbclip/342/review45139.html).

St. John’s Wort
St. John’s Wort (Hypericum perforatum), a plant native to temperate and subtropical regions of the world, has long been used in many cultures to treat depression. Numerous research studies, including a 2008 study published as part of the Cochrane Systematic Review, have found that St. John’s Wort is at least as effective as standard antidepressant drugs at treating mild to moderate depressive disorders, but with few potentially harmful side effects (http://www.sciencedaily.com/releases/2008/10/081007192435.htm).

When taken as a whole extract, St. John’s Wort has also been shown to help naturally alleviate sleep disorders, promote relaxation, and boost energy levels in such a way that avoids the “spikes” and “plunges” typically associated with consumption of caffeine and other stimulants. St. John’s Wort is considered to be a safe, inexpensive herbal remedy that can help promote improved overall mental health.

Camu Camu
Camu Camu (Myrciaria dubia) is a tropical rainforest plant whose berries have the highest known levels of natural vitamin C in the world. The plant’s fruit, which is naturally tangy and sweet, contains a host of nutrients, including vitamin C, that fight the negative effects of the herpes virus, promote immune health, alleviate inflammation, and fight bacteria and viruses. Camu Camu also has adaptogenic properties that normalize bodily processes during stress, and help relieve symptoms of depression.

In his Clinician’s Handbook of Natural Healing, Dr. Gary Null, Ph.D., critically-acclaimed nutritionist and researcher, lists Camu Camu as the second most potent known plant for containing natural antidepressant compounds — and best of all, eating camu camu has absolutely no know negative side effects
Therapeutic Ranges for Vit C falls between 3000-5000mg day

Ashwagandha
Ashwagandha (Withania somnifera), an Indian plant that has long been used in Ayurvedic medicine, contains powerful adaptogenic compounds that are known to relieve symptoms of anxiety and depression. The plant is also known to help fight degenerative brain conditions like Alzheimer’s and Parkinson’s, as well as inhibit the growth and spread of cancer cells.

Several studies, including one published in the journal Phytomedicine back in 2000, have found that ashwagandha works as well as, or better than, antidepressant drugs at relieving anxiety and treating depression symptoms. And ashwagandha naturally prevents stress-induced free radical damage without causing harmful side effects (http://www.lef.org/magazine/mag2006/jun2006_report_ashwa_01.htm).
Ashwaganda can be up to 6000mg a day, suggesting to be taken in 3 doses divided.

Maca
Maca (Lepidium meyenii), also known as “Peruvian ginseng,” is a root vegetable that is packed with amino acids, phytonutrients, vitamins, and minerals. Like the other herbs mentioned, it has long been used in traditional medicine to increase energy and stamina, enhance libido, and boost the immune, adrenal, and endocrine systems. 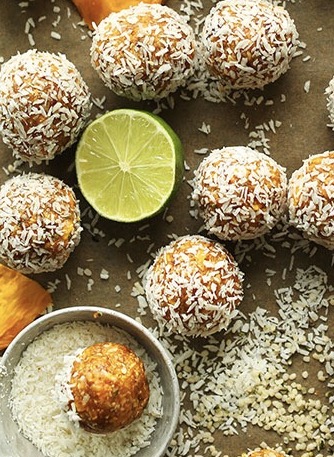 1 1/4 Cup walnuts or cashews
1 Cup firmly packed dried unsweetened mango
10 soaked medjool dates, pitted
2 TBSP hemp seeds
1/3 Cup unsweetened finely shredded coconut
1 lime and zest
Dash Sea salt
Preheat oven to 350.
Add dried mango to a mixing bowl and cover with warm water (don’t skip this step or they’ll be too tough to blend).
Let soak for 5-7 minutes, or until soft and pliable, but not too soggy.
Drain and lay on a towel and pat off excess moisture. Set aside.
Add nuts to a food processor and mix into a fine meal. Set aside.
Add dates and soaked mango to the food processor and mix until a rough paste/sticky dough forms.
Add nut meal, hemp seeds, shredded coconut, lime zest, and sea salt. Mix until it forms a moldable dough.